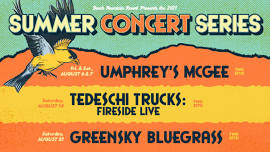 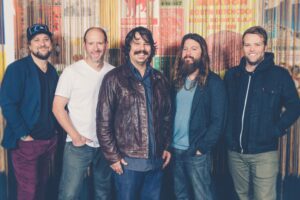 After 18 years together, up to 175 shows per year, nearly 1,000 different setlists, six studio albums, and a litany of live releases, Greensky Bluegrass embodies more than just music for members Anders Beck [dobro], Michael Arlen Bont [banjo], Dave Bruzza [guitar], Mike Devol [upright bass], and Paul Hoffman [Mandolin]. Truthfully, it embodies an ironclad creative bond, familial brotherhood, and a lifelong commitment to fans. At this point, it goes without saying the band means everything (and more) to the Kalamazoo, MI bluegrass mavericks.

As time goes on, the guys continue to do things for the “right reasons,” and that mindset resonates louder and louder amongst a growing fan base. A live force of nature renowned for bringing rock ‘n’ roll showmanship to high-energy bluegrass, the group has sold out hallowed venues such as Red Rocks Amphitheatre and the legendary Ryman Auditorium in addition to igniting stages everywhere from Bonnaroo and New Orleans Jazz Festival to Austin City Limits and Outside Lands. Their unpredictable performances remain the stuff of legend attracting diehard devotees who typically travel far and wide to experience multiple gigs. In 2014, If Sorrows Swim bowed at #1 on the Billboard Top Bluegrass Albums Chart, while the 2016 follow-up Shouted, Written Down & Quoted cracked the Top 3. Along the way, they have also earned praise from Billboard, AXS, Westword, and more.